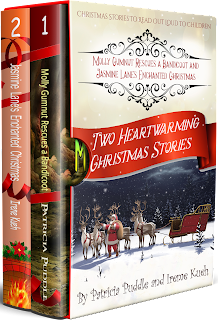 Two Heartwarming Christmas Stories by Patricia Puddle and Irene Kueh
Story One - Molly Gumnut Rescues a Bandicoot Molly loves her neighbour's cat, but when she catches him attacking a baby bandicoot, she shoos him away and rescues the tiny creature. Realising his back is bleeding, she names him Furble and rushes him to the animal hospital. The vet says Molly can't keep the bandicoot because they're protected native animals and must to go to a wildlife sanctuary and then be released back to their territory. Determined to keep the tiny marsupial, Molly informs him that her grandmother is a volunteer at a local wildlife sanctuary and pleads with him to let her take her take Furble there. When the vet agrees, Molly's relieved because she's sure Grandma won't send Furble back to the cat's garden.After taking photos of Furble to enter in the Christmas Calendar Contest, Molly's sure she'll win the prize of having his image on the front page; that is until her little sister accidently deletes all her photos. As if her day isn't bad enough, Grandma turns up with the bandicoot, informing her that now his wounds have healed, she'll be releasing him back into the neighbour's garden at dusk. Terrified that Furble will be eaten by the cat, Molly kidnaps him and takes him on a journey to find a safer home. When things go drastically wrong, she realises she's made a bad mistake. Now Furble's in even more danger, and so is Molly.Story Two - Jasmine Lane's Enchanted Christmas Jasmine Lane is thrilled when Christmas Eve comes around because it's also her sweet sixteenth birthday. She's thrilled when her parents and the whole neighborhood of Lincolnshire throw her a surprise party, but seeing Scotty Knight, her childhood best friend again is the best present she could have. When she opens a beautiful gift congaing a snow globe, she shakes it with Scotty and they both tumble into an enchanted journey full of adventures.